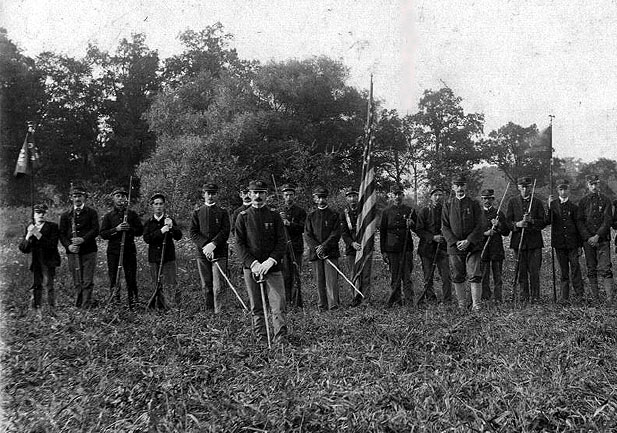 The Sons of Union Veterans of the Civil War was established in 1881 as the successor to the Grand Army of the Republic, the Union Army Veterans' organization. It was chartered in 1954 by Act of Congress.
The Oliver Tilden Camp was created in 1884 and is now one of two Camps in the downstate area of New York State. The Camp was named for Captain Oliver Tilden who lived in Morrisiania, an area of the Bronx. When the Civil War came, Tilden formed Co. E, 38th Volunteer New York Infantry. He was killed at Chantilly, Virginia on September 1, 1862. Tilden is buried at Woodlawn Cemetery in the Bronx.
Meetings of the Oliver Tilden Camp are held the last Wednesday of every month from September to June at at 346 Broadway, Manhattan, NY. This building is about midway between Chambers and Canal Streets, the entrance is around the corner at 108 Leonard Street. A 7:00 P.M. business meeting will be held in the conference room. A guest speaker will speak at each meeting on various Civil War topics.
The Oliver Tilden Camp conducts the annual observance of General Ulysses S. Grant's birthday on the last Sunday of April at the National Monument in upper Manhattan. New members of the Camp are initiated during the General Grant ceremonies. The Camp also participates in the Memorial Day, Flag Day and Veterans Day parades in the City; the annual November Flag Service at St. Thomas' Church and the Flag Service sponsored by the Military Order of the World Wars. It also conducts Civil War headstone dedications. The Camp's Color Guard and Musical Unit participate in community parades. The Camp also participates at encampments, displaying artifacts in a Civil War officers Wall tent. It is also involved in commemorative services at Cypress Hills National Cemetery and other cemeteries in the area.
If you are a male descendent of a soldier, sailor or marine regularly mustered and honorably discharged during the War of Rebellion, 1861 to 1865, consider membership in this friendly and active Camp. Members of the Camp will assist in identifying a veteran ancestor. Membership may also be extended as an "Associate Member" for individuals without a veteran ancestor. For more information, contact Commander George J. Weinmann.

Back to the Oliver Tilden Camp 26 SUVCW Home Page!